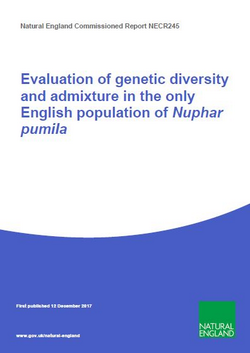 Least water-lily Nuphar pumila is known from over 100 sites in Scotland, but only from Cole Mere in England, although it formerly occurred in other meres in Shropshire.
Natural England commissioned this study of Nuphar pumila, under the Species Recovery Programme to gather information to improve its conservation status at Cole Mere SSSI, Shropshire and to develop and implement a Species Recovery Plan with the aim to maintain a self-sustaining population of N. pumila in England.
The work was commissioned in three parts: