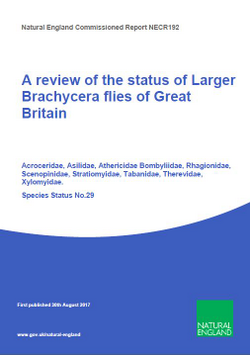 The Species Status project is a recent initiative, providing up-to-date assessments of the threat status of taxa using the internationally accepted Red List guidelines developed by the International Union for Conservation of Nature (IUCN) (IUCN, 2012a; 2012b; IUCN Standards and Petitions Subcommittee, 2013, 2014). It is the successor to the JNCC’s Species Status Assessment project which ended in 2008. This publication is one in a series of reviews to be produced under the auspices of the new project.

The Larger Brachycera is a taxonomically loose group of 11 families in three super-families. In the current British checklist (Chandler 1998) they comprise (in taxonomic order) the Xylophagidae, Athericidae, Rhagionidae, Tabanidae, Xylomyidae, Stratiomyidae, Acroceridae, Bombyliidae, Therevidae, Scenopinidae and Asilidae. Although the popular name has no taxonomic validity, it is a convenient label to denote a group that is popular with British Diptera recorders. They are all covered by one Recording Scheme.