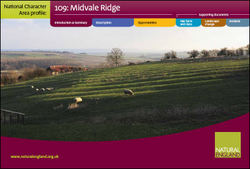 The Midvale Ridge National Character Area (NCA) is a band of low-lying limestone hills stretching east–west from the Vale of Aylesbury in Buckinghamshire to Swindon. It is surrounded by the flat lands of the Oxfordshire clay vales, giving extensive views across the surrounding countryside. It is a predominantly agricultural area with a mixed arable/ pastoral farming landscape, cereals being the most important arable crop. The main towns are Swindon, at the western end, and Oxford, which lies across the centre of the area, but otherwise the settlement pattern is characterised by small nucleated villages along the top of the ridge and along the springline. The soils types are a mix of heavy rendzinas, stagnogleys and lighter sandy brown earths with small patches of sandy soils.
The area is significant for its geological sites and has been a focus for study since the 19th century. It has yielded fossils of international importance, including the holotypes for several ammonite species and several species of prehistoric sponges known only from the Faringdon area.
Further information