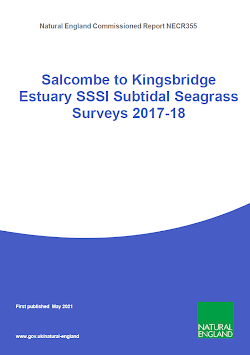 Natural England requested the Environment Agency undertake a drop-camera survey of the subtidal seagrass (Zostera marina) beds in the Salcombe to Kingsbridge Estuary Site of Special Scientific Interest (SSSI) in September 2017. A follow-up survey, where an echosounder was used to map the extent and drop-camera were used to sample areas not covered in 2017, was undertaken in September 2018. Aerial photography, echosounders and dive surveys have previously been used to measure the extent of the Salcombe Harbour seagrass beds.

The drop-camera survey was undertaken using camera mounted onto a 1 m2 photo-quadrat, and lowered of the side of the vessel. Camera stations were initially planned at 20 m intervals on a triangular grid over areas of the estuary where seagrass had been historically recorded. The survey was conducted on the Environment Agency vessel Three Rivers, within 2 hours either side of high and low tide. The images were assessed for percentage cover of Zostera marina, macroalgae, kelp, non-native wireweed (Sargassum muticum) and bare sediment. The percentage cover values were then interpolated to provide an estimation of total bed extent.