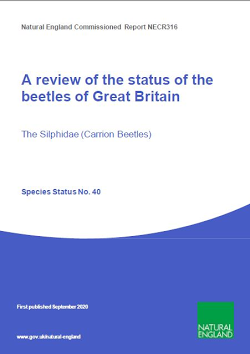 Decisions about the priority to be attached to the conservation of species should be based upon objective assessments of the degree of threat to species. The
internationally-recognised approach to undertaking this is by assigning species to one of the IUCN threat categories using the IUCN guidelines.
This report was commissioned to update the national threat status of beetles within the Silphidae. It covers all species in this group, identifying those that are rare and/or under threat as well as those which are non-threatened and non-native. Reviews for other invertebrate groups will follow.