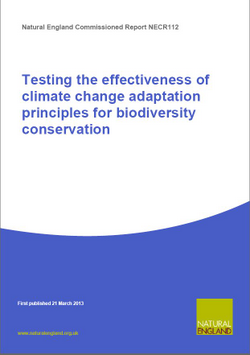 Climate Change is a threat to the conservation of ecosystems, the biodiversity they support and the benefits they provide to people. In response to the threat that climate change poses, various sets of principles have been identified to guide adaptation for conservation.
Within the UK conservation community, the most widely quoted sets of adaptation principles are those produced for the UK Biodiversity Partnership and the England Biodiversity Strategy. The principles are based on good ecological theory, but there has been very little practical testing or assessment of which approaches work best in particular, real – life circumstances. Without stronger empirical evidence of this sort it is difficult to translate high level principles into practical initiatives on the ground and to prioritise scarce resources.
This work was commissioned to start the process of testing and evaluating these high level adaptation principles.
On the basis of ecological theory encapsulated in the adaptation principles we would expect any sensitivity to be moderated – and thus resilience increased – by a range of environmental variables such as increasing size of habitat patches, site and landscape heterogeneity and connectivity of habitat patches.
This work is part of a process of developing the evidence base to ensure that ecological networks are developed in ways that promote their resilience to climate change and thereby ensure their long-term value.