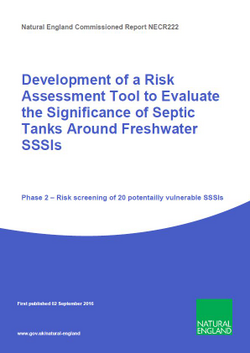 Nutrient enrichment from diffuse sources is a major issue for freshwater SSSI sites not meeting favourable condition and for water bodies not meeting good ecological status under the Water Framework Directive (WFD). Therefore, failure to tackle diffuse water pollution effectively presents a significant risk to the delivery of Biodiversity2020 and the WFD.
There is growing evidence that small sewage discharges (SSDs), in practice mainly septic tank systems, may pose a significant environmental risk to freshwater habitats in certain situations and under certain conditions. However, the extent of this risk and its potential impact across the freshwater sites of special scientific interest (SSSI) series are not well understood. Similarly, on a site-specific basis it has often been difficult to confidently identify where new SSDs can be located without causing unacceptable risks to freshwater SSSIs. Natural England considers that it is important to address this evidence gap to improve the future management of SSDs in the catchments of vulnerable SSSIs. Part of this process is the identification of designated sites at the greatest risk, where interventions are most needed. This information is also important to inform the development and implementation of Diffuse Water Pollution Plans (DWPPs).
To help address this evidence gap, Natural England commissioned the Centre for Ecology & Hydrology (CEH) in 2014 to undertake a map-based risk assessment for 20 freshwater SSSIs thought to be at significant risk from SSDs on the basis of available information.

The assessment was based on a risk framework previously developed by CEH for Natural England (NECR170 and NECR171). For each site examined there were two main outputs:

These outputs will enable Natural England to better identify those sites where further investigation, and possibly interventions, are required to appropriately manage the risk posed by SSDs. Furthermore this information will allow Natural England to provide better advice in response to future consultations about the locations of new SSDs. At sites where the eutrophication risk posed by SSDs has been predicted to be potentially significant, further analysis at the local-level is now required to ground truth the findings of this study .