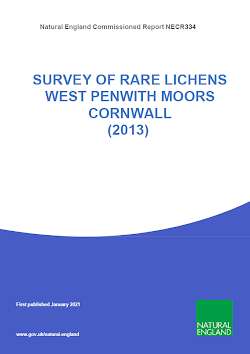 Natural England is gathering evidence to support the potential notification of key areas of semi-natural habitat in the West Penwith Moors area of west Cornwall as a Site of Special Scientific Interest (SSSI). Habitat and specialist species surveys are being commissioned within the overall area.

Requirements: a list of nationally rare and scarce lichen records within the overall survey was determined by Natural England. The requirement for this survey is to update these records by confirming the presence or absence of these species at their previously recorded locations or on suitable habitat in their vicinity.

Where possible a note of the health of the population of each species within each survey location should be made, including reference to potential threats such as loss of a population due to natural succession.