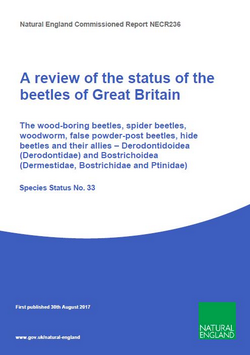 The Species Status project is a recent initiative, providing up-to-date assessments of the threat status of taxa using the internationally accepted Red List guidelines developed by the International Union for Conservation of Nature (IUCN) IUCN Standards and Petitions Subcommittee, 2014); (IUCN, 2012a; 2012b). It is the successor to the Joint Nature Conservation Committee (JNCC) Species Status Assessment project which ended in 2008. This publication is one in a series of reviews to be produced under the auspices of the new project.

Many beetles are important ecological indicators (much more refined than most plants) due to their dependency on complex factors such as vegetation structure, microclimate and substrate. They are also found in a much wider range of habitats than some of the more popular groups of insects such as butterflies, dragonflies and bumblebees. Monitoring their status and abundance can provide a very useful indication of ecological ‘health’, in a way that monitoring plants, birds, bats or other insect groups, for example, may not.