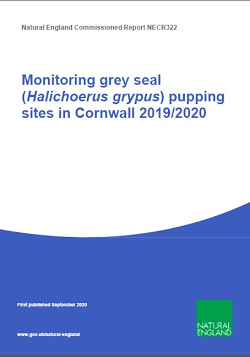 CSGRT provided data on grey seal pupping in Cornwall for the 2019-2020 season.
Complementary boat and land-based surveys recorded 153 unique grey seal pups at 47 different cave and cove locations across Cornwall. Of these, fifteen pups were found dead and sixteen pups were observed through to successful weaning.
The two most productive areas for pups were West Cornwall (n=61) and North Cornwall (n=48). These areas also demonstrated the highest rates of site fidelity and ‘individual seal’ site fidelity when comparing 2016 to 2019 data. Pupping sites within West Cornwall and North Cornwall coincide with Sites of Special Scientific Interest where seals are identified as features of special interest.
Land-based surveying was a reliable and non-intrusive method to monitor grey seal pup production in all but the most remote or inaccessible locations. All pups were recorded by land-based surveyors except for four: two at Lands End and two at the Lizard.
During boat-based surveying, disturbance was minimised by surveying larger caves over high tide. This reduced the distance of intertidal boulders the seals must cover to get to the sea; reducing the risk of injury to seals associated with stampedes without affecting the quality of gathered data. However, it remains challenging to balance the harm:benefit trade-off regards gaining information on seals, while not disturbing them by boat-based surveying at cove sites when larger numbers of seals are present.