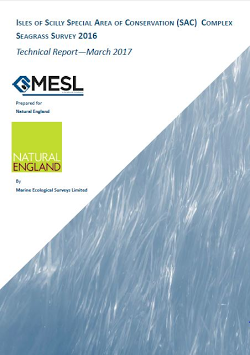 Marine Ecological Surveys Limited (MESL) was commissioned by Natural England to conduct a subtidalmonitoring survey of the Isles of Scilly Complex Special Area of Conservation (SAC), specifically looking at the seagrass (Zostera marina) beds. The survey was undertaken by MESL between 30th August and 9th September 2016 and sites were accessed by RIB using drop down video techniques at 815 stations todetermine the extent and condition of the seagrass. The purpose of this survey was to provide Natural England with an evidence‐based assessment of the condition of seagrass as a sub‐feature of the SAC. The study focused on a 12 key sites within the SAC, which include areas which have previously been subject to multiple survey efforts: Broad Ledges (Tresco), Old Grimsby Harbour (Tresco), West Broad Ledges, Higher Town Bay (St Martin’s), Little Arthur (Eastern Isles), Bar Point (St Mary’s) and St Mary’sHarbour as well as some lesser researched regions: Rushy Bay (Bryher)
St Martin’s (north), Tean, Samson and Tresco East. The primary finding of the investigation is that when compared to the extents recorded during the aerial survey in 2010, the seagrass beds in 2016 were reduced in size across the SAC. When directly compared by area, an estimated total of 134.8Ha of seagrass was present across the survey area in 2016 compared to 184.1Ha in 2010, demonstrating a net total loss of approximately 49.3Ha in five years. However, this estimate should be taken with some caution as contrasting survey methods were employed during eachurvey, each with their own associated errors which may have resulted in the under or over
representation of seagrass extent. Additionally, the 2016 investigation focussed on 12 isolated sitesonly, not the entire SAC as was the case in 2010, although the 2010 data have been clipped for the purposes of this study to allow for comparisons of seagrass condition within equivalent regions. The most extensive seagrass beds were located within the Little Arthur area in the Eastern Isles (49.07Ha) while the smallest extent was at Tresco East (0.04Ha). Additionally, a single site with no seagrass was located in the Samson area. Seagrass was recorded in waters ranging from ‐3.1‐8.6m depth. Turbidity at all stations was low. The invasive species Sargassum muticum was recorded at 60 stations in seven areas across the SAC and was coincident with seagrass at 15 stations. The locations at which S. muticum was found in 2016 are
similar to those noted in the 2015 dive survey, although the 2016 investigation takes in to account a wider survey area not covered by the annual dive surveys undertaken in the SAC. Possible evidence of infection from ‘wasting’ disease was apparent in four of the 12 focus areas. Signs of the disease were recorded in areas with the larger seagrass extents (Broad Ledges, Higher Town Bay, Little Arthur and Bar Point) and spatially were relatively spread across the survey areas. Signs of human disturbance such as pollution or physical damage were rare within the SAC. The one exception was St Mary’s Harbour, where erosion of seagrass in patches resulting from the mooring of leisure boats was apparent. Despite evidence of disturbance in the St Mary’s area, the seagrass bedswere dense at multiple locations and appeared to be in good condition in areas away from the eroded
patches.