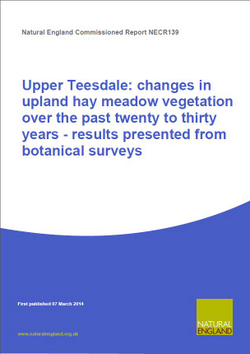 Upland hay meadows are one of the rarest grassland types in the UK. Upper Teesdale holds some of the best examples of MG3b Anthoxanthum odoratum – Geranium sylvaticum upland hay meadow habitat and has been well studied over the years. The resulting botanical data has never been gathered into one place.

The use of inorganic fertiliser on grasslands increased greatly during the 20th century and is now widespread. Where permitted it is applied on meadows and grasslands in Upper Teesdale, sometimes alongside farmyard manure (FYM), and there is a perception amongst some landowners that higher levels of nutrients are required to maintain botanical quality under the cold and wet climate of the area.

This project was designed to collate the existing botanical data for upland hay meadows in Upper Teesdale and relate this to management information, especially inorganic fertiliser use. The findings will be used to advise on the future management of hay meadows and SSSIs. They will also be taken into consideration in the future development of agri-environment schemes.