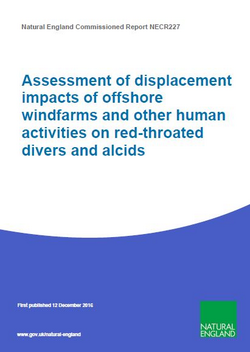 Offshore windfarms have a number of potential impacts on birds at sea. One of the most significant is the potential to displace birds from within and around the windfarm footprint and associated ship traffic access routes – ie effectively to cause habitat loss (albeit indirectly). Divers and seaducks are generally considered to be amongst the most sensitive bird species to disturbance from such human activities in the marine environment and to be the most likely to exhibit displacement in response to offshore windfarm developments, but a range of other species, including auk species (Alcids) are also vulnerable to displacement from offshore windfarms.

Due to the relatively recent development of the offshore windfarm industry, there are as yet very few long term datasets covering the periods before, during and following construction of offshore windfarms on which robust statistical analyses of distribution and abundance data for key bird species have been, or could be undertaken.
The requirement of this project was to develop a novel approach to the analysis of the Outer Thames estuary datasets that enabled all of the data that were suitable and available to be used in the model building stages, to provide greater confidence in the model outputs and develop a modelling framework that can be updated to allow inclusion of additional post-construction data in the future.

The project also undertook preliminary modelling of the existing datasets (up to and including the first year of post construction surveys) to test for significant changes in the distribution and density of birds over time and to identify the location of such changes with a focus on pre-construction and during-construction changes.

The findings will be used by those engaged in marine spatial planning and impact assessments, in particular the Statutory Nature Conservation Bodies (SNCBs), regulators and developers in the offshore sector who need to assess the potential displacement impact of offshore development proposals on marine birds.