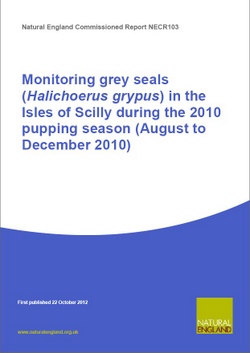 One of the qualifying marine features for SAC designation is the Annex II species the grey seal (Halichoerus grypus). SAC sites for grey seals reflect both the largest breeding colonies, based on pup production, as well as the geographical range of breeding sites. The Isles of Scilly was designated a European Marine Site (EU code UK0013694) in 1996, with the grey seal, as one of its named features.

The objectives of this study were to carry out a comprehensive re-survey of the grey seal population breeding on the Isles of Scilly, following the 2005 survey (Westcott, 2008). Information on monitoring methods for marine mammals is contained in the guidance manual on Common Standards Monitoring (CSM) Guidance for Marine Mammals, JNCC (2005) and for this survey was based on essential attributes including (1) pup production; (2) the distribution of grey seal pups; (3) accessibility of SAC sites for breeding; (4) disturbance; (5) extent of breeding, moulting and haul out sites measured in terms of total area.