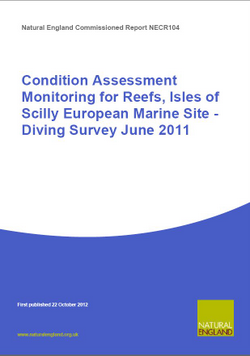 One of the qualifying marine features for SAC designation is the Annex 1 reef habitat. Monitoring studies on subtidal reef within the Isles of Scilly SAC were initiated during nine days of diving fieldwork in June 2011. A team of six divers undertook a total of 62 person-dives at 13 sites, spread between the north coast of St Martin’s to the south coast of St Agnes.

A total of six attributes (assigned to the four sub-features of the ‘reef’ feature: kelp forest communities; vertical rock; subtidal rock and boulder communities; and subtidal faunal turf communities) were considered and a monitoring strategy for each was devised (referred to as ‘tasks’).

All six tasks were undertaken, with baseline monitoring data being acquired for all. All sites were recorded with video, including a number of recorded quadrats and transect positions. dGPS positions and accurate depth measurements of all sites were taken which, together with site diagrams, should provide sufficient information for biotope relocation in future visits.