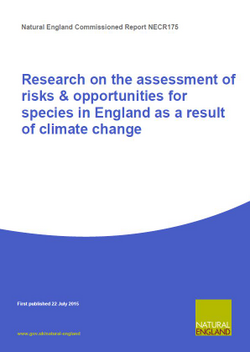 There is already strong evidence for a wide range of impacts of climate change on England’s wildlife, such as changes in distributions, phenology, community composition and habitat condition. The UK is one of the best recorded sites in the world for species distribution and clear shifts in the northern limits of some mobile animal groups have been identified, as well as redistributions to higher altitudes. In order to target conservation resources efficiently and effectively, Natural England has to prioritise action based on the rarity of species, their threats and their current rates of decline. As part of this, Natural England needs to understand how it can help species to adapt to climate change and to encourage species that might thrive under climate change if given the appropriate management.

This project aims to fill an important gap in our evidence base by using the latest modelling techniques and analytical frameworks to explore how species are likely to change their distributions (and for migratory birds, their population sizes) as a result of climate change. The analysis was undertaken for 3000 species of a wide range of terrestrial taxa (from vascular plants and bryophytes to spiders and beetles) and assesses the potential risks within their existing ranges as well as the opportunities that might be provided in new areas. A more detailed analysis was applied to 400 species, taking into account the factors that might exacerbate or mitigate the impacts of climate change. Finally a very detailed framework was applied to 30 species to explore the adaptation options that might be available to conservation practitioners.

The project thus provides a good evidence base for conservation practitioners to use within the context of their planning at national and local scales. It also demonstrates the value of the more detailed frameworks to provide additional information of value in addition to identifying potentially useful adaptation options.