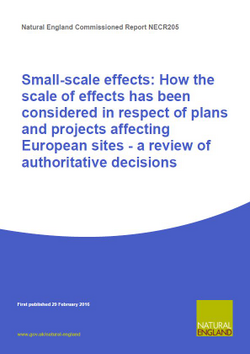 This report updates and builds upon a previous Natural England (then English Nature) Research Report from 2006 entitled 'How the scale of effects on internationally designated nature conservation sites in Britain has been considered in decision making – A review of authoritative decisions’. The report aims to provide an analysis of authoritative decisions which considered the scale of the effects (either the proportion of the area of a site or qualifying habitat feature, or the proportion of a population of a species) that may be considered to have been relatively small in the context of the case, which can serve as a referencing tool for Natural England and other decision makers.